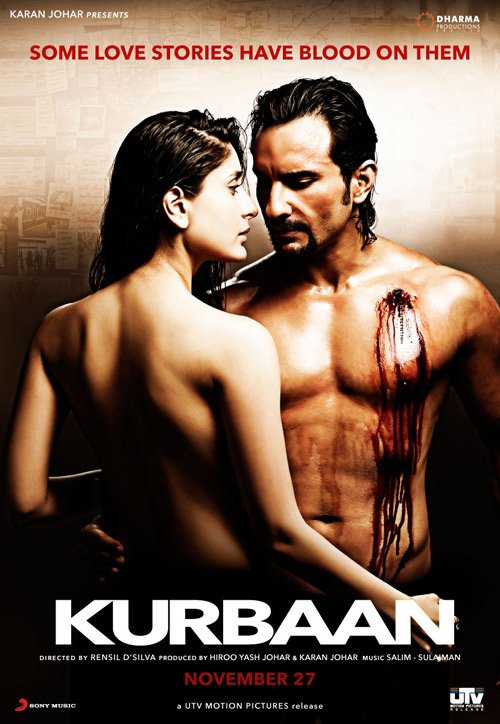 Salim-Sulaiman who? One cannot ignore the less-popular but talented music director duo who entered films through the back(-ground score) door route and enthralled music lovers with their popular numbers in Chak-de India (remember the Sukhwinder-sung title song), Fashion (did you forget Mar jaawan and Kuchh khaas hai?) and Rab ne banaa di jodi. Not to mention Dor, Luck (Aazma luck aazma), Bombay to Bangkok (Dheere dheere chal zindagaani) and Iqbal (Aashaayen) to name a few more. Let us see what they have for us in Kurbaan…

In a Salim-Sulaiman score, how can Sukhwinder Singh stay behind? Dua hai has him pairing with Kailash Kher and Marianne DCruz. Both the folk-ish singers (Sukhwinder and Kailash) hold the fort well. However, this one seems like run-of-the-mill stuff. Will sound like a good hear for a few weeks, no doubt about it.

Ali Maula suprises you in a pleasant way! Salim Merchant‘s silky vocals are sweet to your ears. The chorus backs him up very well. Definitely one of the better numbers in the album. However, you won’t be able to ignore the faint shades of Maula mere le le meri jaan (Chak-de India) in the track.

Let discotheque visitors sway to the beats of Ali Maula (remix)…I would prefer the ‘original’ version.

Hold your breath for the next one…you will hear it get released in Rasiya. Shruti Pathak (Mar Jaawan – Fashion and Paayalia – Dev D fame) sounds different but stable in low notes. A beautiful classical-based composition that has Kareena Kapoor complementing her with the rhythmic deep-breath and a few couplets. Could Salim-Sulaiman have used Shreya for the number? Listen to Devdas songs (Bairi Piya and Hamesha tumko chaahaa) and you’ll realise what I am pointing at.

Tum shuru hue jahaan main khatam hua…croons Vishal Dadlani in the title song (Kurbaan Hua). It seems to be about existence …You start existing where I finish…huh? Vishal does an AR Rahman at a couple of places here. But this number seems to have mass-appeal…it’s a matter of time till you see it climbing countdown charts. Had heard music directors becoming multi-faceted individuals …does seem to be real in Salim Merchant and Vishal Dadlani‘s cases!

Songs to look out for:Shukran Allah, Ali Maula and Kurbaan Hua (in that order)

Final verdict: A nice one this. Not commercial like Ajab Prem ki… or London Dreams, but definitely a critic’s delight! Sounds like someone’s offering namaaz at the mosque. At other points, it talks about sacrifice as an essential part of eternal love.

A music lover, critic and self-proclaimed aficionado!
View all posts by Shailendra Singh →
This entry was posted in Music reviews. Bookmark the permalink.

5 Responses to Kurbaan is different